The criticism you ingested growing up may have long stopped, but it’s still alive and kicking in you. Your mind has been permeated with it. All of the disapproving energy and critical words, tones, comments, snide remarks, sighs, facial expressions, looks, body language, innuendos, unspoken judgments, etc. – it’s still actively residing in your mind. And you’re still reacting to it and against it. You’re still acting in ways to protect yourself from experiencing more of it.

(I’m referring to parental criticism here, but all of this information also applies to criticism you may have received from anyone close to you growing up.)

As a child, you didn’t have the intellectual capacity to question the validity of your parent’s criticism. Your parents were your world. If they believed it, it must be true. So you did what we do: you internalized their perspective and built part of your self-identity around it: you’re not good enough, you’re unworthy, and you can’t do anything right.

A client in his late 30’s recalls, with sorrow and disbelief, the pride he felt one day when he was 4 years-old. When he ran to tell his father, “I didn’t do anything bad today, daddy!”

I worked with a 10 year-old child who told me his father shoots him.

“With bullets,” he said.

He drew a picture of a boy with his heart area like a piece of Swiss cheese.

“What bullets does your father use to shoot you?” I asked him.

Criticism has tremendous power and can be devastating to our developing sense of self. It becomes the truth of who we believe we are.

You learned that life isn’t safe. The people who were supposed to love you were hurting you. So you quickly learned that you can’t trust people. That you’re on your own.

You believe that the determination of your worth exists outside of yourself. Other people have the power to validate or invalidate your sense of self. So when you get praised, you can relax temporarily. But when you get criticized, you feel instantly diminished.

People react differently to their need for other people’s approval. Some people give up even attempting to get it, while others are relentless in their pursuit of it.

Despite needing it, you may have shut down and not even tried to gain other people’s approval, believing you’ll never be good enough anyway. You feel inadequate, ashamed, and guilty. You shrink, avoid, keep to yourself, dumb yourself down, do anything not to call attention to yourself. You do not flourish.

You abandon any possibility of living up to your fullest potential.

Withdrawing into yourself, like a turtle in its shell, helps you avoid risking further criticism in theory. But in reality, this self-protective strategy invites further criticism. So now you’re caught up in the self-fulfilling prophecy created by the closed system of “I’m not good enough.” You may respond to this by blaming or judging others or with acting out behaviours.

Or, on the other side of the spectrum, you may be contorting yourself like a yogi to gain approval. If this is you, you’re excellent at adapting to other people’s expectations. You know how to please people. And you’re equally adept at placating people and not rocking the boat and keeping the peace. Your opinion doesn’t matter. You don’t share what you think or feel or want. It’s all about other people and what they think and feel and want. You don’t count. Other people are more important. You just adapt and adjust and morph yourself into what other people want. I’m sure the irony isn’t lost on you. You’re running around contorting yourself into a pretzel trying to gain the approval of people you don’t trust. It’s exhausting. And so it goes.

Whether you’re a turtle in your shell or an expert chameleon, you have to behave in ways that compromise yourself. You have to deny your own wants and needs. You have to reject yourself and ignore and invalidate your own perspectives, feelings, and truths.

Of course you are angry! Gagging yourself hurts. Betraying yourself feels so fundamentally wrong. Self-invalidation is excruciating. You shouldn’t have to be doing this. But you do.

Even if you do receive the approval you’re so desperately seeking, it doesn’t penetrate because no one knows the real you. Anyone who tries to connect with you is really connecting with your mask, your false protective self. The real you is there, hidden behind your wall or under your shell. Unknown to anyone. And hardly remembered by you.

You can’t register, let alone accept, the gift of a compliment. Because the compliment contradicts the truth you believe about yourself, your mind will ignore, distort, dismiss, or invalidate it. The compliment won’t even land. Rather, you’ll probably wonder what that person wants, what they’re up to, and how they’re trying to manipulate you.

You perceive criticism where it doesn’t exist. You read into other people’s words. You hear things that weren’t said. You perceive slights where none were intended. Alternatively, if someone does criticize you, it cuts you to the core, triggering your inadequacy and unworthiness. Any number of your defensive mechanisms may get automatically triggered. You might shut down or start justifying yourself. Or you might back-pedal. You might lash out with counter-criticism. Or, in yet another attempt at self-protection, you might deny or deflect criticism or not allow yourself to even register it.

You’re either approved of or not. Loved or not. Worthy or not. Perfect and good enough or not. You may be aware of falling into this extreme mindset, but it’s very difficult not to think this way when your mind is steeped in criticism. This rigid mindset throws the baby out with the bath water. For example, you conclude your presentation was a failure because one person in the audience yawned.

Your inner critic is brutal. You can do no right. You judge, blame, chastise and pick at yourself in the form of negative self-talk. You’re constantly second-guessing and doubting yourself. Sometimes you even lash yourself with the same words that were said to you.

People are nervous around you. They’re probably walking around on eggshells, trying not to wake the sleeping dragon. You apply your own impossibly harsh standards and expectations to other people. And this doesn’t usually go well.

If you’re actively seeking approval, you’re driven, uncompromising, and perfectionistic. You’re constantly trying to prove your worth and over-compensate for your inadequacy. But you’re never satisfied with your accomplishments. You either can’t meet the mark well enough. Or you move the goalpost as soon as you’ve scored so it’s still not good enough. Despite the fact that you’re often praised for your successes and leadership, you don’t receive the praise. You remain unworthy and not good enough in your own eyes.

It’s not uncommon for people who’ve grown up with a lot of criticism to see themselves in each of the points I’ve mentioned. Internalizing this poison has been harming you more than you may have known. Unfortunately, if you don’t choose to do anything about it, the effects of marinating in criticism can last the rest of your life.

The good news is that it doesn’t have to. You can do something about it. With Core Belief Engineering, I can help you deal with the ramifications of it. I can help you process through the damage and the hurt, and heal the scars left from it. Together, we can remove the energy of the criticism you internalized – all of it. So that it’s no longer actively living inside you. Your slate can be swept clean so that you can live in a state of being, not reacting. So you can live in the present. The disapproval that has been holding you in its vice grip can be left in the past where it belongs.

If my thoughts here resonate with you and you’re ready to set yourself free, I’d love to connect with you. Call me, and let’s talk.  SCHEDULE A FREE CONSULTATION 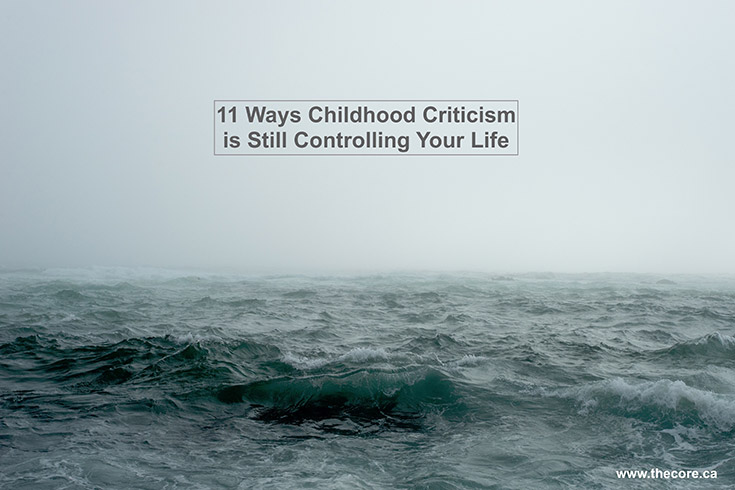 Sign up to receive updates about new Core Connections podcasts and videos.